Conway Hall is owned and operated by Conway Hall Ethical Society, a membership organisation and educational charity with a history spanning two centuries.

The Hall hosts a wide variety of talks, debates, performances, exhibitions and community events. It is renowned as a hub for free speech and independent thought, for suffragettes, political radicals, scientists, philosophers, artists, performers; campaign, charities and other non-profit organisations.

Our Library holds the Ethical Society’s collection, which is the largest and most comprehensive Humanist and ethics related research resource of its kind in the United Kingdom.

The Society began as a dissident congregation in 1787 in rebellion against the doctrine of eternal hell.

By 1793 it had its first premises in Bishopsgate.

The next step was rejection of the Trinity – which lost the Society many of its members.

It survived the loss, however, and has since survived many similar losses of membership following similar progressive steps on the road from universalism and unitarianism to the present humanist position, which it had reached by the end of the nineteenth century.

In 1817 William Johnson Fox became minister of the congregation, which in 1824 built a new chapel in South Place.

Today, a plaque commemorating the South Place chapel can be seen on the building at River Plate House (nos. 12–13) which stands on the original site. 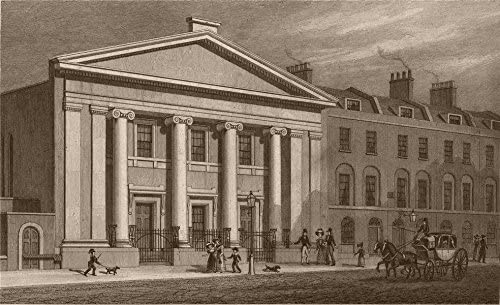 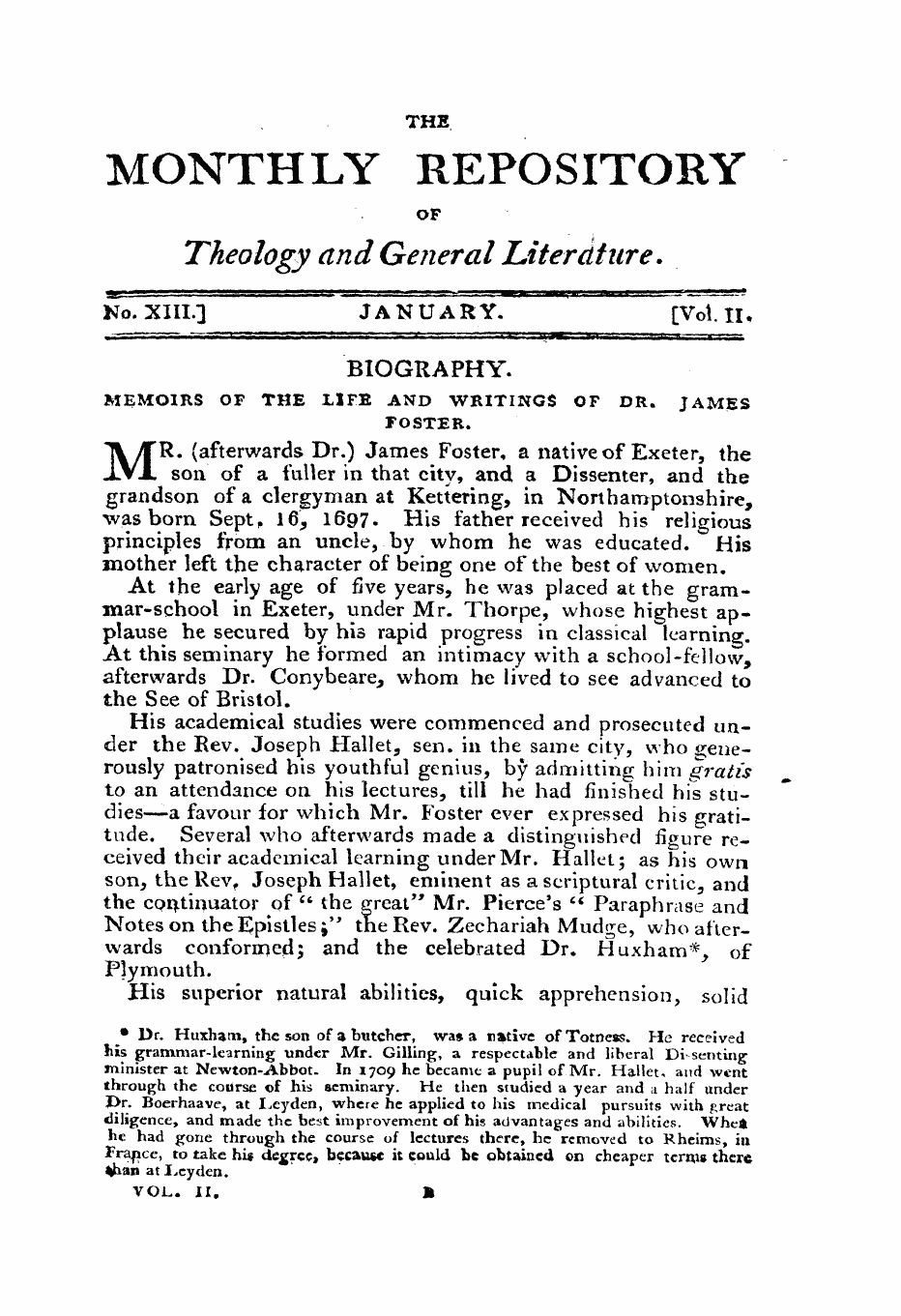 In 1831, Fox bought the journal of the Unitarian Association, the Monthly Repository, of which he was already editor.

For five years this was effectively the first ancestor of the Ethical Record, the Society’s current journal.

Verse was contributed by both Tennyson and Browning – the latter always spoke of Fox as his “literary father”.

The contributors of articles included John Stuart Mill, Leigh Hunt, Harriet Martineau, Henry Crabb Robinson and a fearless iconoclast, William Bridges Adams, whose outspoken series of articles on marriage, divorce, and other social questions (along with those of Fox) split the South Place congregation again.

So came about another evolutionary step that included severance from the Unitarian movement and established South Place as the centre of advanced thought and progressive activity.

Among the causes with which Fox identified himself and the Society were the spread of popular education and the repeal of the Corn Laws.

In 1847 he entered Parliament whilst remaining minister at South Place for several more years.

The most outstanding of Fox’s successors in that position was an American, Moncure Conway, after whom the Society‘s present home is named.

He had adopted an uncompromising anti-slavery position at home, although he had two brothers serving in the Confederate army, and came to England in 1863 on a speaking tour.

He settled at the South Place Chapel from 1864 until 1897, except for a break of seven years (from 1885 to 1892) during which he returned to America and wrote his famous biography of Thomas Paine.

During that interval, in 1888, under the leadership of Stanton Coit, the name South Place Religious Society was changed to the South Place Ethical Society. 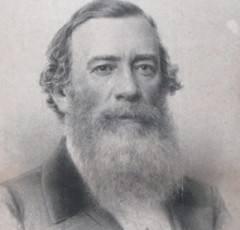 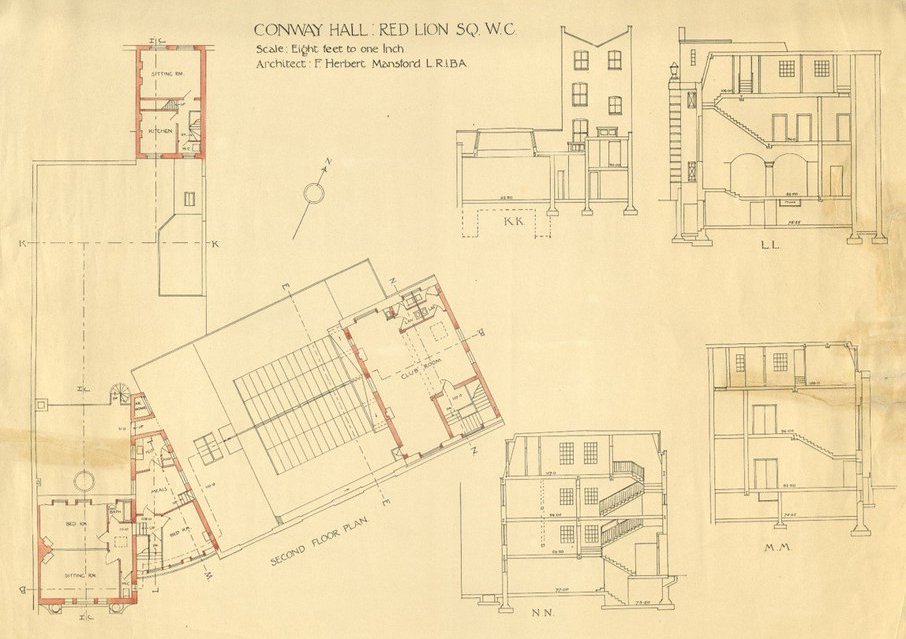 Indeed his brother, Wallis Mansford, was advocating selling the Chapel and erecting a new building which would have a ‘swimming bath convertible into a gymnasium in winter months,’ a bookshop, separate lending and reference libraries, a labour and emigration bureau and a roof garden.

Progress was unfortunately halted by the First World War and the need to fund raise for the project.

However in 1928, building work commenced and the following year Conway Hall was open to the public.

For more information about the building of Conway Hall please see our timeline – Building Conway Hall: A Home for Humanism.

Concerts, Journal and ‘The Good’

During this time, it was very daring to hold any kind of secular entertainment on Sundays.

This series was destined to reach a high standing in the musical world and has now numbered more than two thousand concerts, its 2000th concert being held in March 1969.

The first official organ of the Society was the South Place Magazine which flourished from 1895 to 1909, and, like the present journal, consisted largely of summaries of the Sunday discourses.

An article that appeared in October 1897 in protest against the teaching of religion in schools would, if reprinted today, seem an up-to-the-minute statement of the Humanist position in the current controversy.

On the magazine‘s demise for lack of funds, its place was taken by a less ambitious publication called simply the Monthly Lists which gradually gained sufficiently in size and importance to justify a change of title in 1920 to Monthly Record.

The latest change, to Ethical Record, was made at the beginning of 1965.

‘The great and the good’!

It would take up too much space here to list all the famous people who have occupied the Society‘s platform and been reported in its journal during all these years, but here is a more-or-less random selection of Appointed Lecturers and others: