“She knows the value of her unencumbered independence” (George Bernard Shaw)

Charlotte Payne-Townshend (1857-1943) was an Irish heiress and a political activist.  She married the playwright George Bernard Shaw in 1898 at the registry office in Henrietta Street, Covent Garden.

The economists and social reformers Beatrice and Sidney Webb, early members of the Fabian Society, and co-founders of the London School of Economics and Political Science, persuaded Charlotte join the Fabian Society and to donate £1000 to the London School of Economics library and endow a woman’s scholarship – the Shaw Library was founded by and named after her. Beatrice Webb later wrote of Charlotte in her diary “by temperament she is an anarchist, feeling any regulation or rule intolerable, a tendency which has been exaggerated by her irresponsible wealth”.

The Webbs introduced George to Charlotte; Shaw wrote to the actor and actor-manager Janet Achurch “we get on together all the better, repairing bicycles, talking philosophy and religion”. It was a marriage of minds but a marriage which is thought to have been celibate; Charlotte showing a deep apprehension of sexual intercourse and firm of the belief that rearing children and motherhood were no strong part of a woman’s natural destiny. 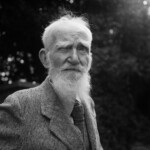 Unwilling to be a passive onlooker of her husband’s fame, but vitally important to his career, Charlotte shaped Shaw’s output by acting as his advisor, secretary and agent throughout his life. She taught herself to type and read Shaw’s shorthand – a diversion Shaw believed – “she amused herself by writing my critical articles at my dictation”. She also masterminded her husband’s vegetarian diet to the world’s chefs on his foreign travels “Mr. Bernard Shaw does not eat meat, game, fowl or fish or take tea or coffee”. She proposed topics for his plays, and her research into the life of Joan of Arc became his late masterpiece Saint Joan. Her Irish nationalist sympathies made her an active supporter of Home Rule asking Shaw to do ‘everything in his power’ to defend Roger Casement after he was arrested for treason in 1916, having tried to secure German support for an armed rebellion in Ireland against British rule. She was a prominent backer of the feminist review The Freewoman (banned from the shelves of W.H. Smith in 1912 because of the open discussions on sexuality) and marched in the Boston Suffrage Parade of 1914.

Conway Hall Library and Archives holds many books and pamphlets by George Bernard Shaw – social and political tracts, critical studies, essays and biographies. All titles can be found on the Library website: https://conwayhall.org.uk/library/

Regrettably far less attention has been given to his wife’s independent life; certainly without her constant practical and emotional support Shaw’s achievements would not have been so great. The legacy of Charlotte Payne-Townshend can be found in the library she founded, the enduring influence of the Fabian Society, and in the inspiration she gave to many women in their campaigns for women’s rights.