This post was written by Conway Hall Library & Archives volunteer, Katarina, about an early sci-fi story found within our pamphlet collection. This is just one of over 1300 nineteenth-century pamphlets we are making freely available online through the Heritage Lottery funded digitisation project, Victorian Blogging. 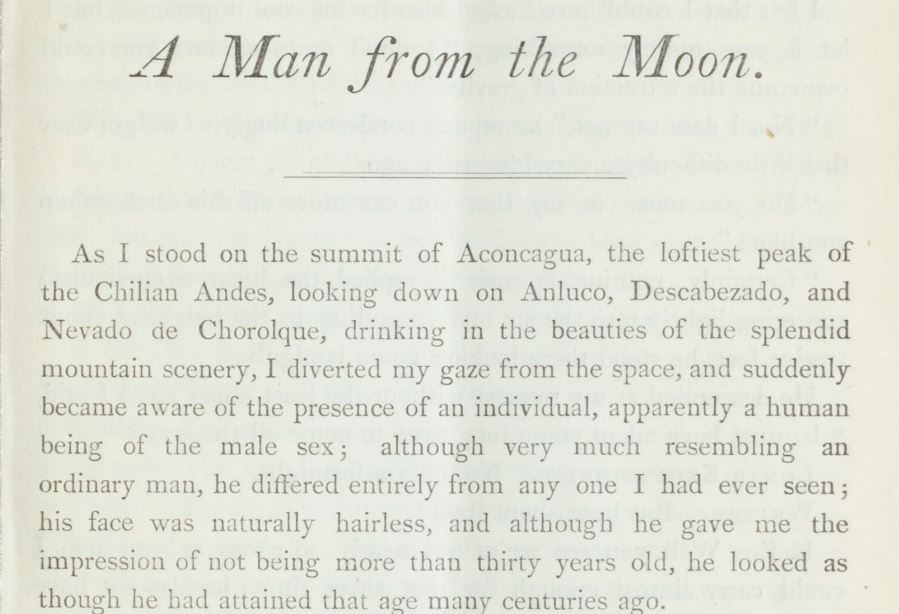 The opening paragraph to A Man from the Moon.

‘The Man from the Moon’, a short science fiction story written around 1870, rallies against the ills and ignorance humanity lives under in organised religion to espouse the benefits of secular society.

It begins with the narrator on a mountaineering excursion in the Chilean Andes. Having reached the summit of Aconcagua, he chances upon a strange individual, ‘apparently a human being of the male sex’. The writer quickly learns that this man is in fact from the Moon, a ‘Lunar Excursionist’, on a rare visit to Earth – a planet they do not visit often due to Earth’s inhabitants being ‘so much behind’ the Lunar Excursionist’s own society.

The narrator readily engages in discussion with the Lunar Excursionist (L.E. for short). As the narrator interrogates the L.E., learning about the advanced society that inhabits the Moon, he grapples with issues which we are still concerned with today: the ethics of eating meat, the ills of capitalism and the equality of women.

Those who live on the Moon rarely eat meat, and if they do it is chemically created. They are at an advantage however, as they can even ‘draw limited sustenance from the air’. Inhabitants of the Moon have also done away with a monetary society. After the acceleration of a capitalist system on the Moon meant ‘life had become so fast, that is was really too much trouble to live’ a group of ‘people calling themselves “scientists”’ set to finding a solution. After 200 years of experiments, scientists discovered that eschewing ‘the feverish excitement’ of earning money, the Moon’s inhabitants could live up to 1500 years, although most now choose 500. There is ‘only one description of private property’ on the Moon, and that is ‘public libraries, and everyone is interested in preserving them and adding to them’. With most women no longer willing to undergo the ‘inconvenience’ of reproducing, the inhabitants of the Moon are content to eventually die out.

The benefits of secularism is the most significant issue promoted in this pamphlet. The L.E. sets to explaining it is this absence of religion that allows his society to be so advanced, and tries to convince the narrator of the many ways religion has held down the inhabitants of the Earth. Whilst promoting radical views for his day, dismissing Creation, the Immaculate Conception, life after death, and Christianity as the one true religion, the pamphlet advocates for gradual change. The L.E. admits the move to secularism was difficult to adjust to after priests were ‘improved out of existence’,  but that societal order ‘remedied itself, all ill-regulated passions being deleterious to life, no one who desires to live indulges in them’.

A call for the need for a secular society, the author of this pamphlet is still subject to the many prejudices of his day. With sweeping statements about women, people of colour and Jewish people all expressed by the Lunar Excursionist, the Moon does not look so advanced a society to our eyes today as the author may have originally intended.