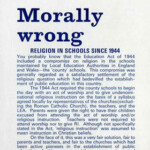 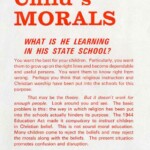 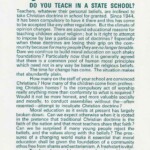 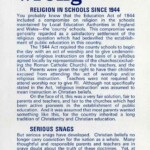 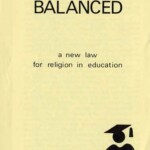 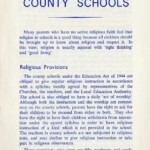 Following the Moral Religious Thinkers Conferences in the 1920s, the link between education and religion continued to feature prominently in the Ethical Movement. The 1944 Education Act had supported a relationship between religion and State education introducing compulsory prayer and Religious Instruction. By the 1960s the British Humanist Association’s opposition to what they perceived as ‘religious indoctrination’ had become a central campaign within the movement. The Association sought to replace Religious Education with Moral Education based on “common-sense and common humanity”.

A joint statement released by the British Humanist Association and the National Secular Society in 1967 stated:

“It is no longer sensible to link morality and religion; indeed, it may be positively harmful. Our community is not uniform but plural. Liberal men and women of all ideologues increasingly see the need for a fully open society, in which generally accepted values are recognised by all”.

In 1988 the Education Act was amended, relaxing the rules around compulsory religious worship in schools, and in 1996 it was repealed completely.