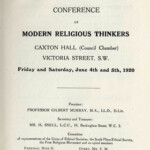 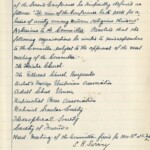 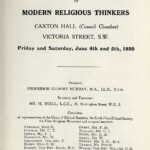 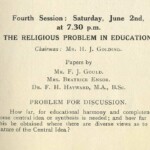 In late 1919, the Union of Ethical Societies appointed representatives of South Place Ethical Society, the Free Religious Movement and the Union to form a Joint Committee to ‘consider and report as to the lines upon which it would be desirable to call a conference of Modern Religious Thinkers’.

The Joint Committee first met on 5 January 1919 and immediately agreed to hold a conference in June the following year. Tickets would be available on the door and discussions were to focus on the status of the Church, common themes for a universal faith, and the role of religion in modern life.

The Conference proved to be a success, with a second meeting announced for 1921 and a motion put forward by the Committee to include representatives of the Theistic Church, Ethical Church, British and Foreign Unitarian Association, Adult School Union, Rationalist Press Association, National Secular Society, Theosophical Society and the Society of Friends.

The Committee continued until 1924, and although the conferences did not entirely succeed in their aim ‘of unity among modern religious thinkers’ the records do demonstrate an early desire of the Ethical Movement to discuss controversial topics. Furthermore, issues for debate, such as the role of religion in education, continue to pay a part in the work of the British Humanist Association today.