Since my last post, a lot of my energy has been directed towards organising the North West Consortium Doctoral Training Programme Annual Postgraduate Conference (just slips right off the tongue, doesn’t it…). The event will host student papers, workshops led by students, workshops led by professionals, posters and, naturally, plenty of food and drink to nourish lots of slightly poor students. We have around 136 people attending, which is great, but means there are lots of emails to answer! I do actually enjoy planning and attending conferences, and this time I’ve been part of a small team of PhD students from various fields and universities in the North-West. They are all very creative which has led to some great ideas for the conference, and they also understand the importance of ‘research lunches’ to try out the food before we book it. 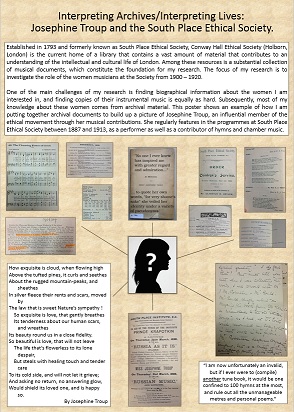 Never having been someone who likes to make life easy, I will also be chairing and presenting a poster at this conference. This will be my first experience of both so I am a little nervous, but I imagine that I will enjoy presenting a poster as I tend to present better in less formal situations and it’s a chance to talk about my work with new people.

Titled ‘Interpreting Archives/Interpreting Lives: Josephine Troup and the South Place Ethical Society’ my poster aims to show how I am making sense of the women musicians’ lives and artistic approaches, when there is very little biographical information available, let alone examples of their instrumental work.

My poster is largely made up of photos of archival material that I am using based around Josephine Troup, including programmes, hymn music, poetry, posters and letters. One item that particularly interests me is a letter from 1912 that she wrote to a man who had recently written an article on ‘Ethical Hymnology’ in a recent edition of Ethical World. 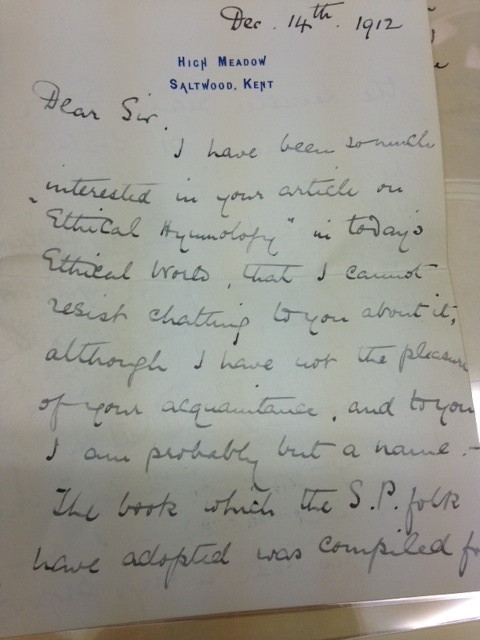 Interestingly, she agrees with some of his criticisms, including that many of the hymns from the Ethical hymn books, which she compiled, contained music that lacked a certain ‘lyrical quality’. Her defence is largely based on the fact that she had to work with Mr J M Robertson and Mr Gould, who had priorities such as keeping the book from closely resembling the old hymn book, and avoiding any hymns that contained lyrics ‘of the Salvationist type’.

She describes herself of being ‘amused’ by the ruling out of one hymn which had apparently been an old favourite at South Place because of a reference to Moses. This account unfortunately suggests that, despite her generous financial and musical contributions and many accounts that the books would not exist without her efforts, she was still subject to male authority.

The letter also expresses some of her musical tastes. She notes that she is pleased that the author is not against congregational singing, but mentions the ‘unsatisfactory singing’ of the congregation and a lack of ‘gusto’, which she puts down to unfamiliarity with the music. She also wrote: ‘I am now unfortunately an invalid, but if I ever were to advocate another tune book, it would be one confined to 100 hymns at the most and rule out any of the unmanageable metres and personal poems’. This allows me to disregard many hymns in her collections as ones that were not really to her taste, and perhaps will lead me to a better understanding of her musical preferences. It also appears to me to be a very unique insight into what someone would have done if they had another chance, at a point in their life when they can only reflect on the past. 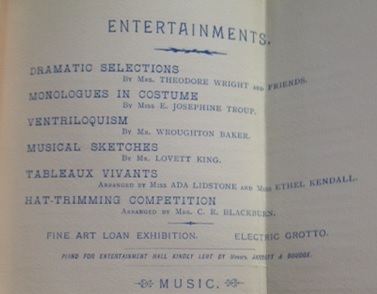 One other example that is a particular favourite of mine is a programme for one of the many fundraising bazaars that were hosted by South Place between 1887 and 1920 in aid of the debt on the society’s building that at that time was the South Place Chapel in Finsbury. Josephine Troup regularly appears in these programmes as part of the organising committee, running the stalls and contributing or playing music.

One programme stood out to me though, where Josephine is listed in the entertainments section as providing ‘monologues in costume’. Whether this indicates that she was also a talented actress, or that she didn’t take herself too seriously, I think it highlights her dedication to the society and confirms many accounts of her well-rounded personality.