Admittedly, it has been a while since my last post, but I have a fairly legitimate excuse. Since my return from Poland, I have been in a small bubble of conference organisation and literature review writing. Consequently, whenever I attempted to write a blog post, my mind was screaming ‘LITERATURE REVIEW! LITERATURE REVIEW!’ as if I shouldn’t/couldn’t write anything else until it was finished and the bubble was burst. I guess the good thing about being wholly consumed in literature review writing is that I clearly wasn’t suffering from writer’s block.

For those lucky souls who have not had to write a literature review before, it is a piece of writing which assesses the current state of literature surrounding your research, highlighting the key texts and demonstrating how your research fits in and (hopefully) provides an original contribution to the field. In the good old days of my undergraduate degree, I believe my literature review was around 1,000 words. This year, I faced the terrifying prospect of attempting to write a significant portion of my potentially 10,000 – 20,000-word literature review. 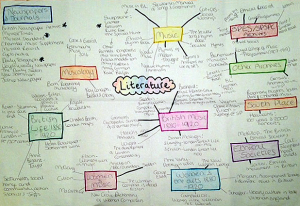 My initial approach was to draw a colourful mind map representing the different genres of literature that I had read during my first year. I have to say, I was actually quite surprised by how much I had got through (pleasantly surprised, as I remember getting to the end of year one and thinking ‘what have I done in the past 365 days?!’). Eventually, I broke this list down into four main categories: primary sources; British intellectual, social and cultural life; British concert life; and music and gender. Clearly, this is quite a broad selection of reading, but the interdisciplinary nature of the topic was one of the main reasons that this area of research appealed to me.

For those interested in this blog because of its links to the history of Conway Hall, I can highly recommend reading Jim Herrick’s recently publication Aspiring to the Truth: Two Hundred Years of the South Place Ethical Society. The book covers some important topics, such as the changing beliefs of the society and the role of women, but also forms an interesting narrative of the history of the society from its beginnings to the present day. If you are more interested in the concerts, the most recent book available is A Hundred Years of Chamber Music by Frank V. Hawkins. Both are available at the Conway Hall library.

If your interest is more general, one of the more unconventional books that I included in my literature review was the novel Howard’s End by E.M. Forster. This was recommended to me as it was written in 1910 and set in the Edwardian era, which comes within my research period (1887–1920). More importantly, there is a running theme of music throughout the book, and chapter five contains a detailed description of the characters attending a concert at Queen’s Hall and their experience of listening to Beethoven’s fifth symphony. As a contemporary novel, it also highlights Edwardian attitudes to the arts, industrialisation, class and gender roles. Forster has some bold things to say and it’s a delightful read. After writing this I am going to get on Amazon to find the DVD to watch over Christmas, which apparently stars two of my favourite actresses, Emma Thompson and Helena Bonham Carter!

Speaking of Christmas, whilst I think last year I did manage to take a good week off, this year forecasts less merriment and more reading and writing over the festive period. One of my least favourite aspects of academia is the constant guilt that I feel whenever I’m not working (good job I quite like working), which probably isn’t that healthy but is definitely a common feeling among my peers. Another of my least favourite things that I have to deal with this Christmas is some form-filling that needs to be done to show that I am ‘progressing’ adequately with my research. For anyone who thinks that PhDs don’t involve a huge amount of bureaucracy, you are wrong.

However, I can’t complain really. One of the great things about my work is that I can write from anywhere, so I’m looking forward to three weeks of having my washing done for me at home by the sea in East Sussex. Also, despite a difficult month writing the part of my thesis that I was most dreading, I am feeling pretty proud of having overcome this hurdle.

This may be my last post before the New Year, so if you have a chance please listen to Ernest Tomlinson’s Fantasia on Auld Land Syne. Tomlinson (1924 – 2015) studied at the Royal Northern College of Music (like me!) during WW2 but left in 1943 to join the Royal Air Force and served France during 1944 and 1945. He returned to England and graduated from his degree in composition in 1947. He had a successful career as a composer, and this piece of music is my particular favourite as it provides the fun game of ‘spot the tune’, as well as being festive!