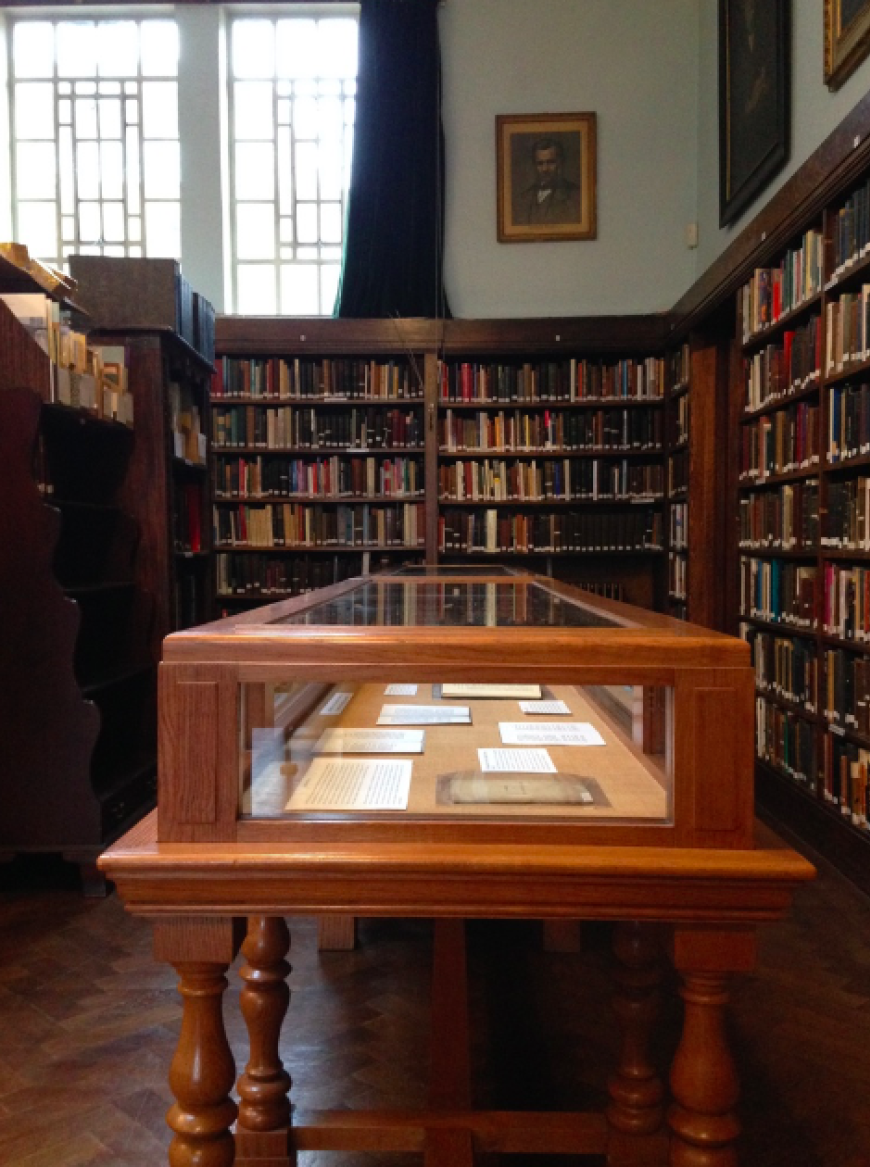 This week I got to do something that I have been looking forward to for a while – I put up an exhibition! The lovely librarians at Conway Hall asked if I would like to fill the exhibition cases in the library for this term, so if you are able to stop by the Conway Hall library and have a look, it is open 10am – 5pm, Tuesday – Thursday. If not, here is my attempt at a virtual recreation of the exhibiton. Enjoy!

Josephine Troup: An example of the role of women in the history of Conway Hall.

In 1993, Nicolas Walter gave a lecture in this building about the story of the Society. He acknowledged that the South Place Ethical Society partly owes its existence to two women who played an important role in converting Winchester and Videl to nonconformist religion, inspiring them to found the society in 1793 that we now know as Conway Hall Ethical Society. He also notes that in 1924, Hypatia Bradlaugh Bonner stated that the part played by women in the Society was generally ignored, and Walter himself claimed that much of the essential but unrecorded work at the Society has always been done by women. Whilst he failed to go into further depth during his lecture, the archives show his assertions to be true, a good example being in the case of the musical life of the Society between 1880 and 1920. These cases display some of the archives relating to Josephine Troup and show the various ways in which she contributed to the Society.

Josephine was a musician who dedicated her life to the Ethical Movement. She had a strong relationship with South Place and throughout her life supplied hymns, hymn books, chamber music, performances, administration work and money to the Society. Sadly, much of her work was not credited, partly due to her use of pseudonyms ‘for very shame’s sake’ and partly because it appears that in collaborative work with men she was often not properly acknowledged. Also, like many extraordinary women from this period, her life has not been substantially documented, however these materials help to create a good picture of her life and achievements.

Josephine Troup lived from 1853 to 1913, and it appears that her death was mourned widely. This small book contains: the text of the address given at her funeral service at Golders Green crematorium by Rev. W. Copeland Bowie on April 16th; the hymns and text from William Rawlings address given at the memorial service held for her by the South Place Ethical Society a few days after her funeral; and the text of Mrs. E. J. Harrington’s article about Josephine, written for the May edition of the South Place Monthly leaflet. The text reveals a lot about Josephine’s beliefs and personal qualities, as well as the impact she had directly on the Ethical Society.

‘She was always warm-hearted, large-minded, open-handed, generous in her friendships: full of kind deeds and gracious acts’. This letter was written by Josephine on December 14th 1912 in response to an article written in The Ethical World about ‘Ethical Hymnology’. The article was clearly quite critical, so Josephine’s letter is full of insightful explanations as to why some hymns were included and others weren’t. On page 4 she writes “But I must tell you that when I was collecting the words, I had to work with Mr J. M. Robertson & Mr Gould, chiefly intent on keeping the book from too close a resemblance to the old ‘Ethical Songs’…’.” Clearly, despite Josephine’s financial contributions and musicality, she was not granted the final say.

On page 2, Josephine writes as a side note “It is my 2nd endeavour in the making of an Ethical Singing book with music, the first being ‘Ethical Songs’ compiled at Dr. Coit’s wish…”. Interestingly, no mention of her is given in the book (782.4COI), which has a preface by Stanton Coit and Gustav Spiller, indicating that they alone compiled the book. Furthermore, in Spiller’s own writing (920SPI), he claims that he was invited by Coit to compile Ethical Songs with him, and again no mention of Josephine is made.

Earlier in this book, Spiller also writes thoroughly about the great success of his hymn ‘Raise Your Standard, Brothers’ (also called ‘Work for Man’s Salvation’) but fails to mention Josephine as the composer. 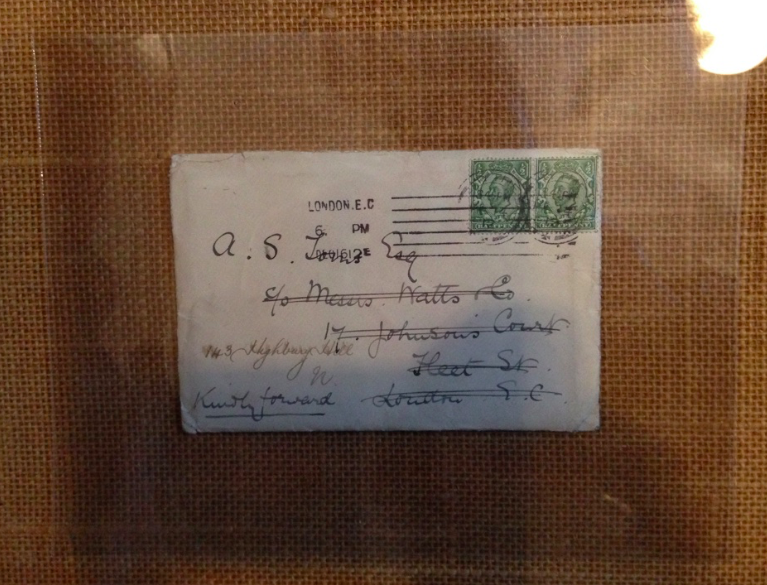 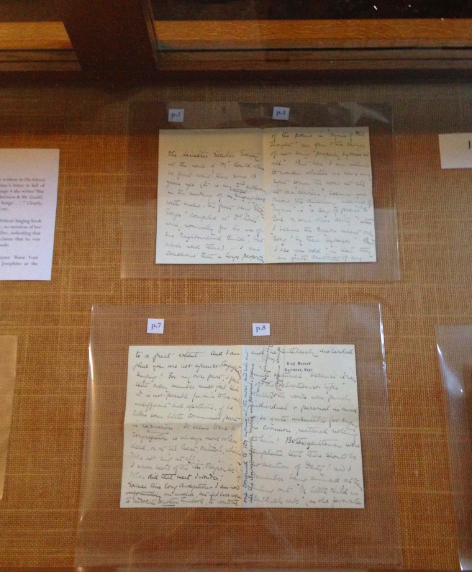 This pamphlet contains autobiographical writing by Gustav Spiller, an eminent figure in the Ethical Movement. The writing was intended for his family, but was published after he died in 1920. It contains his successful hymn ‘Raise Your Standard, Brothers’ on the back page, which was composed by Josephine and included in several of the Ethical Hymn Books. 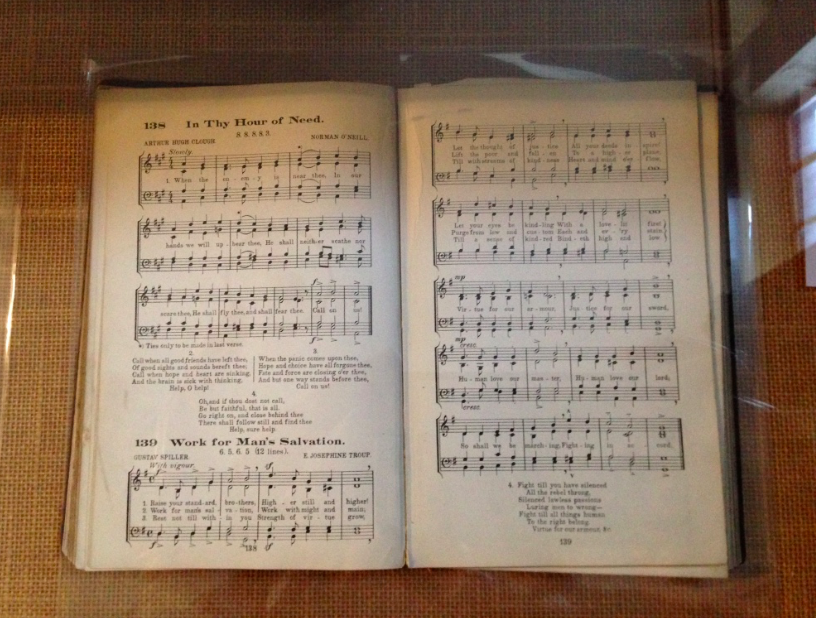 This popular hymnbook was edited and compiled by Josephine Troup, however she was not credited for the work in its publication. There are several editions and they include many of Josephine’s hymns. 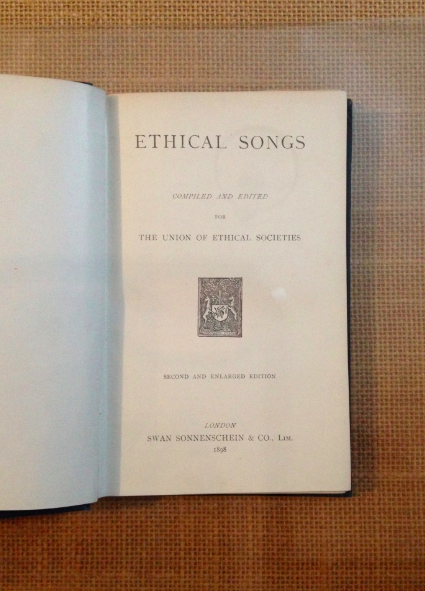 Josephine Troup helped to compile and fund many hymnbooks, including this one. Letters in the archive show that she was even involved in dealing with issues of copyright. It is clear from the contents page that among the list of old and contemporary composers, Josephine contributed the most melodies to this book. 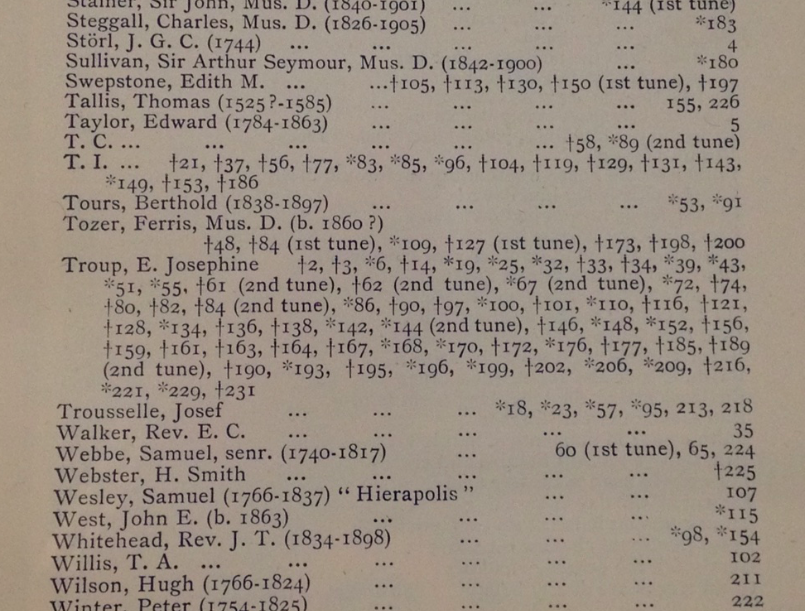 Everyday Songs for Boys and Girls

These children’s hymnbooks, compiled by Josephine Troup in 1897, were written specifically for Children’s Services and could be used at home and in schools. In the preface, Josephine shares her opinions about the importance of providing children with serious music and words in their hymns, noting the ‘happy educational effects’ of children’s singing. Hymns titles include ‘Come, friends, the world wants mending’, ‘What can I do to-day’ and ‘If I cannot be a sunbeam’. 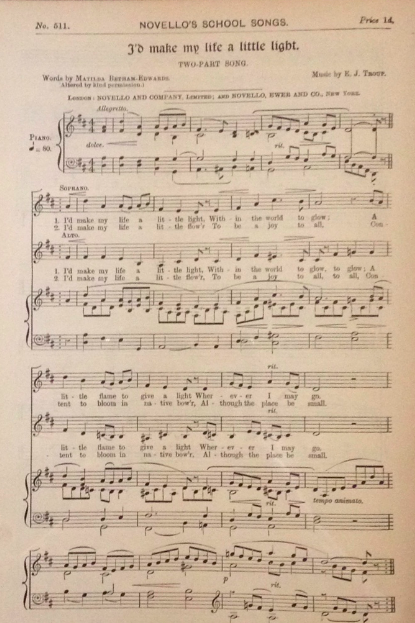 Josephine Troup’s work in the Society was so vast that it is doubtful whether South Place would have had such a successful musical life without her input. Her ambitious nature was reflected in the scholarship that she founded for the Royal Academy, aimed at female students who devoted themselves to orchestral composition. During the early 1900’s it was still quite unusual for women to focus on composition, let alone orchestral music, as women were expected to write songs and pretty tunes for the piano and other ‘feminine’ instruments. Whilst she was sometimes unacknowledged for her work in print, it seems her inspirational efforts at South Place Ethical Society were appreciated at the time. Of course, Josephine is just one exceptional example of the musical women who impacted the musical life of the Society. Our lack of knowledge about these women today may be largely due to the patriarchal way in which history has been documented in the past, but the Conway Hall archives offer a better understanding of the vital roles that women such as Josephine Troup played in the Ethical Movement.

ALERT: Shameless plug… If you would to hear me speak more about my research, please come along to my pre-concert talk at Conway Hall on Feb 26th at 5.30pm. The talk will be followed by a performance by the Albion Quartet at the usual time of 7.30pm, with a programme including music by Bach, Haydn, Schumann and Walton.