While cataloguing Ralph Waldo Emerson’s 10-volume complete works (Riverside edition) I discovered a handwritten letter stuck with sellotape to the front of vol.7 Conduct of Life, a collection of miscellaneous essays. The letter, dated Concord June 1907 (or possibly 1909), is from Emerson’s son, Edward Waldo Emerson (1844-1930), a physician, writer and lecturer. Edward was the executor of his father’s estate and closely involved in the editing of his works. The addressee is ‘William’.

Consultation with the Society’s Honorary Archivist, Carl Harrison (who can read EWE’s writing far better than I) revealed that the substance of the letter is the organising of a plaster bust of RWE to be sent with speed to Dr Stanton Coit. The letter confirms that the bust ordered by Coit was the work of the eminent American sculptor Daniel Chester French, a friend and neighbour of RWE whose most well-known work is the Abraham Lincoln statue in the Lincoln Memorial, Washington, D.C. EWE made arrangements through PP Caproni & Brother, a manufacturer of plaster reproductions in Boston, Mass. The letter includes details of how much Coit would have to pay for the casting, packaging and carriage. The cast would have been made by Caproni from a mould they presumably had for their trade in replicas. Was the urgency expressed in the letter connected to the publication in 1907 of RWE’s Addresses and Essays with an introduction by Stanton Coit?

EWE sends greetings to ‘Mr and Mrs Salter’ at the close of the letter. Assuming the couple to be the parents of William, research in the membership and administrative records of the Society around that time revealed that ‘William’ is very likely to be William Macintyre Salter (1853-1931), the author of Ethical Religion (1905) – Stanton Coit wrote the introduction – and several other philosophical works. A slight mystery remains that Mrs Salter died before the letter was written and the genealogy records that we have been able to consult give no indication that William Salter remarried. 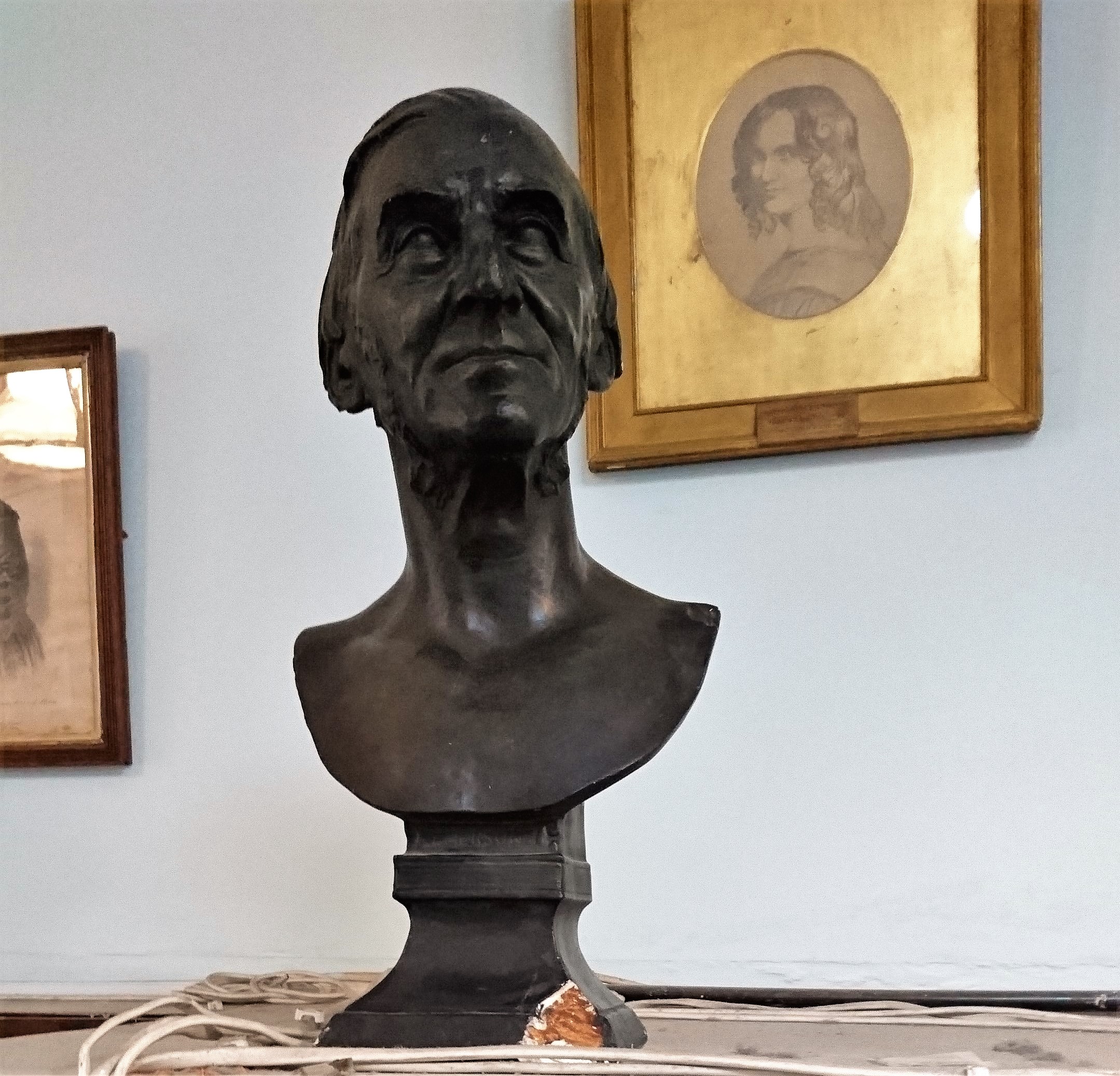 In Conway Hall Library, above the fireplace, is a plaster bust of RWE described as ‘English, 19th century’. An examination of the bust revealed an almost invisible stamp on the back of our Emerson bust reading ‘D C FRENCH’. We believe the Library’s bust is most likely to be the very one made by Caproni for Stanton Coit.

Daniel Chester French’s original two sculptures of Emerson are in the Concord Free Library, Concord, Mass. The first, a bust, was made in 1883-4 after a clay model made in 1879. One of the first plaster casts from the master mould was presented to Emerson on July 26, 1879 and he is said to have commented upon seeing it for the first time, ‘Dan, that’s the face I shave’. Further plaster casts were made from the clay model before French was commissioned by a group of patrons who wished to have a bust of Emerson in Concord Library; the bust can be found today in the reading room.

The bust we have is beautifully modelled and a fine addition to the Library, but there is more research to be done on its provenance. If anyone has information which might further this work please get in touch with olwen@conwayhall.org.uk or carlharrison@outlook.com – we should very much like to hear from you.