This blog comes from our volunteer, Cami Garcia, who selected Rev. James Cranbrook’s pamphlet ‘Human Depravity’ as a highlight of our nineteenth-century pamphlet collection. Little biographical information about Rev. Cranbrook is available, but his title of Reverend, combined with the content of this pamphlet and his decision to publish his work through the radical freethought publisher Thomas Scott, suggests he was a somewhat dissenting clergyman. This pamphlet is just one of over 1300 nineteenth-century pamphlets we are making freely available online through the National Lottery Heritage Funded digitisation project Victorian Blogging. 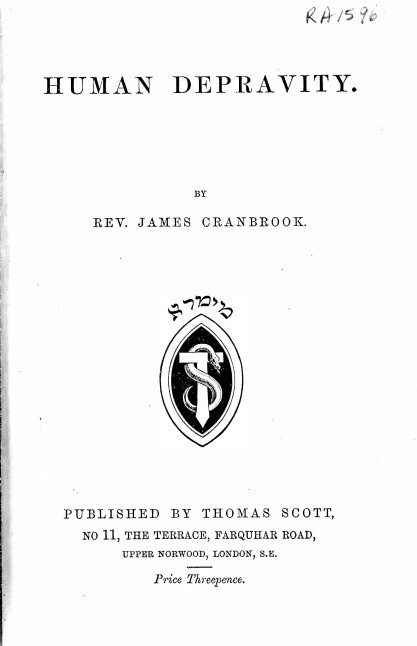 Rev. James Cranbrook argues in his pamphlet Human Depravity that depravity is not, as many years of religious instruction would affirm, an innate state of those less fortunate, but a condition that can be changed with due diligence and discipline. Moreover, he states that enlightened people have a duty to help the less fortunate to mend their ways and see the light.

James Cranbook, author of The Founders of Christianity: Discourses upon the Origin of the Christian Religion, as well as of CREDIBIBLIA or Discourses on Questions of Christian Faith, discusses through the analysis of religious texts how ‘the flesh’ throughout history has been considered innately evil, and so it corrupts and holds the spirit in subjection. In other words, he claims that to be ‘born of the flesh’ was considered as constituting a state of sin and helpless depravity. Cranbook explains the traditional Christian view of this ‘original sin’ and how it could supposedly be overcome through true relations to God.

Cranbrook goes on to argue that humans are in fact naturally moral, and it is only when other and sinister influences have been brought to bear upon them that they may no longer be moral. Such sinister influences, James Cranbook writes, can be the false notions of God which are thrust upon us.

He concludes that ‘sin’ is simply a violation of law, and laws are numerous, complicated and sometimes difficult to apprehend. He writes of the many accepted ideas that have been handed down through tradition and which, incidentally, have no rational basis whatsoever. Ignorance, he states, is due not to depravity, but simply from want of capacity to comprehend, or time to learn. He goes on to suggest that the dogma of human depravity has induced all sorts of false and injurious methods in the treatment of those less fortunate.

To James Cranbrook, it is through educating people to form better habits that human depravity will be eradicated.