16 August 2019 marks 200 years since the attack on over 60,000 peaceful pro-democracy protesters that has become known as the Peterloo Massacre. This event, a landmark in British political history, took place in the area of Manchester known today as St Peter’s Square. Against a backdrop of growing unrest due to the injustice of only 2% of the population possessing the right to vote and the Corn Laws pushing up the cost of food and causing widespread hunger, people gathered to hear from political reformers including Henry Hunt and Richard Carlile. 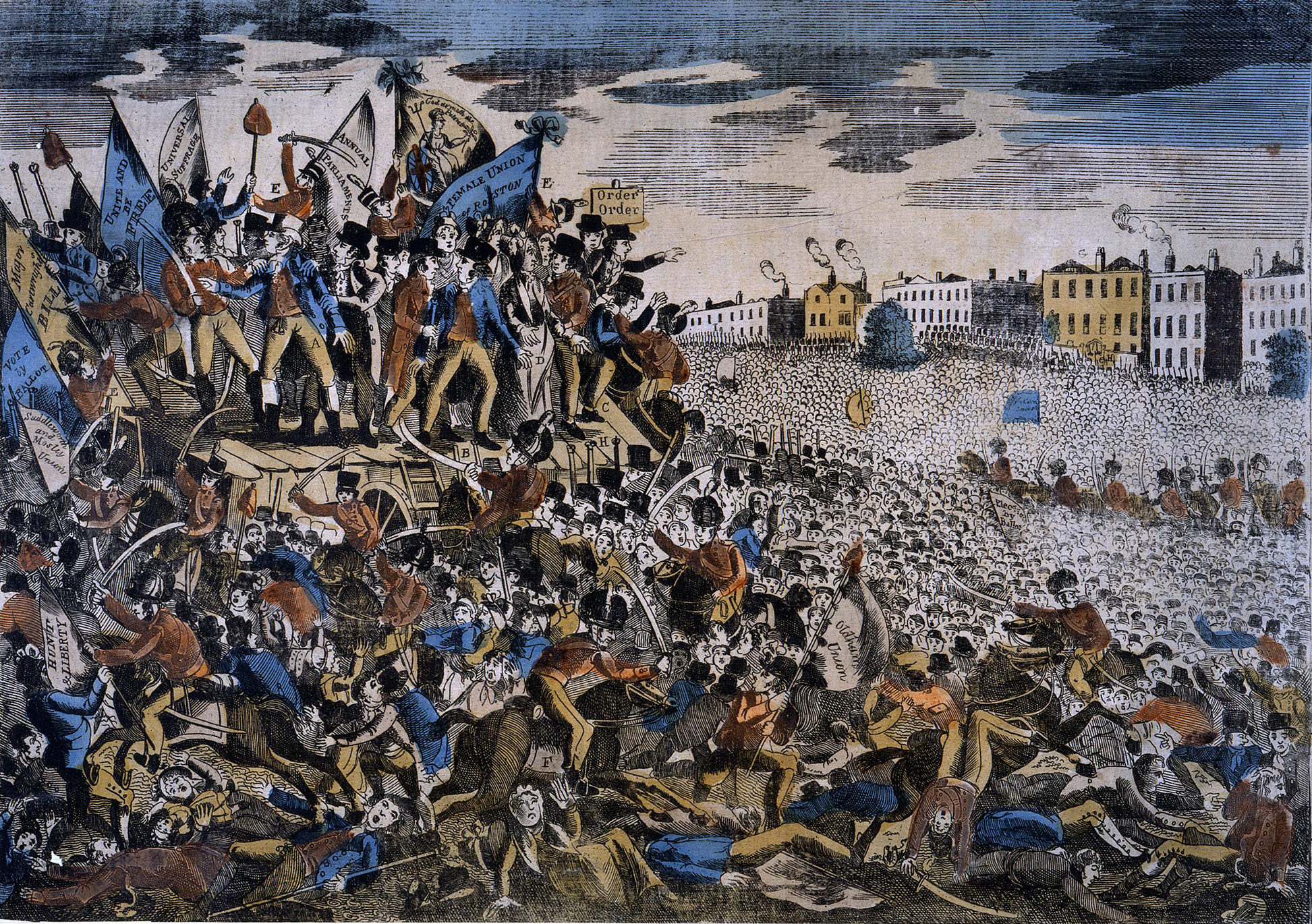 An illustration of the Peterloo Massacre.

Concerned by the growing crowd gathering to hear these radical figures promote parliamentary reform and the abolition of the Corn Laws – ideas quite frightening to the ruling classes – local magistrates read the Riot Act to the small number of protesters near enough to hear it. Soon after, a cavalry armed with swords charged the unarmed crowd, initiating one of the most defining bloodbaths in British history. It is estimated that 18 people died in the Massacre and almost 700 were severely injured by swords and trampling. Those 18 people are viewed today as unwilling martyrs of the fight for democracy.

Whilst most journalists present were arrested in an attempt to prevent the event from being widely reported, Richard Carlile, a radical journalist and publisher who had intended to speak at the gathering, managed to escape to safety. He went on to publish an eyewitness account of the atrocity in his newspaper Sherwin’s Political Register under the title ‘Horrid Massacres at Manchester’. The article described how the cavalry had charged unarmed civilians and openly criticised the government for its role in the incident.

The authorities raided Carlile’s Fleet Street shop, confiscated his stock and closed down his newspaper. But Carlile merely changed the name to The Republican and continued to use it as a vehicle to demand that ‘the massacre […] should be the daily theme of the Press until the murderers are brought to justice.’ 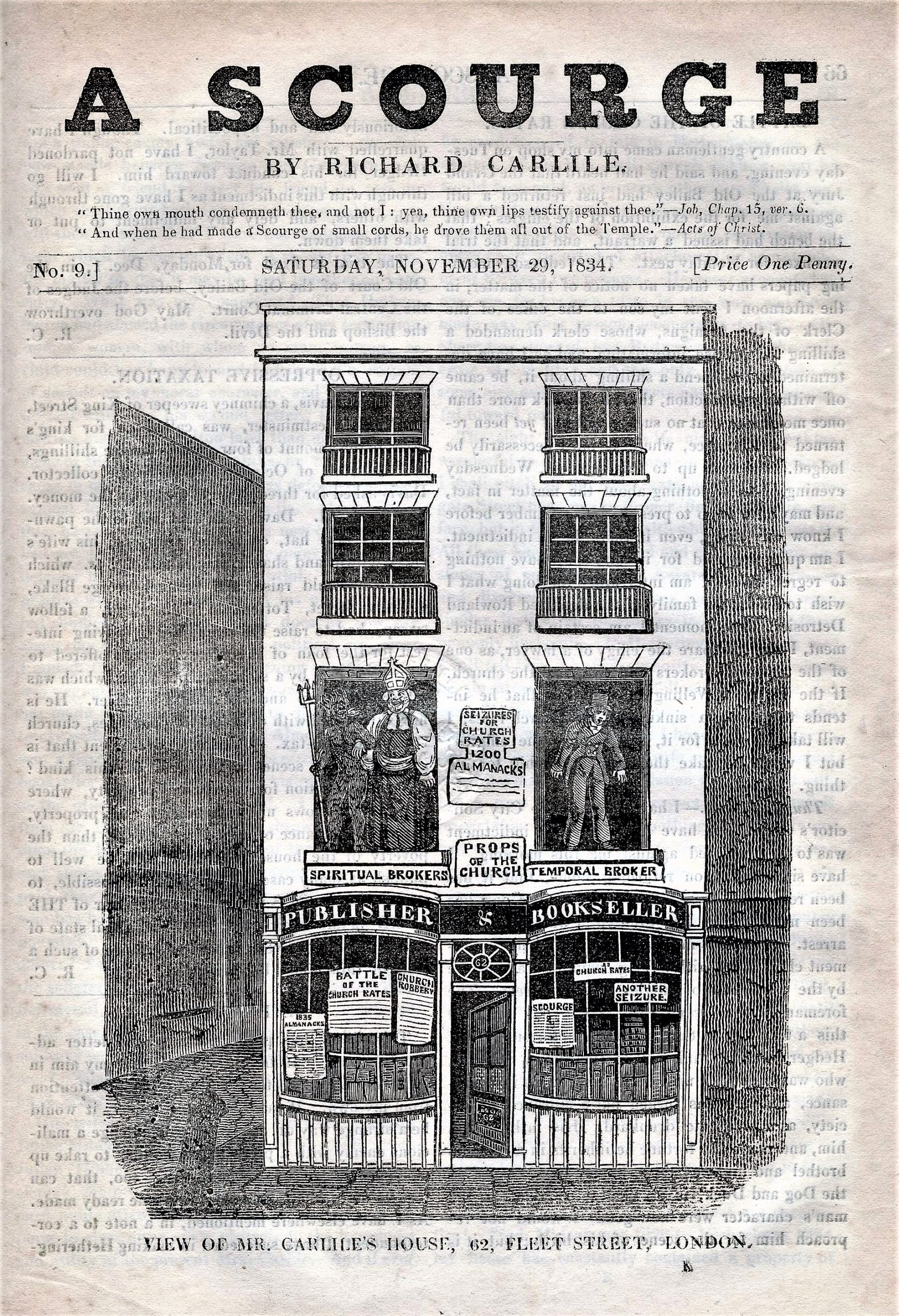 This determination made Carlile something of an enemy of the law and he was soon after prosecuted for blasphemy and seditious libel for publishing the anti-government works of Thomas Paine. The publicity around this trial raised the profile of The Republican and increased its circulation to the point where it outsold pro-government newspapers such as The Times.

Carlile was imprisoned in Dorchester Gaol and from there continued to write for The Republican, while his wife Jane Carlile and sister Mary-Ann Carlile took over its publication until they too were imprisoned. Workers from Carlile’s Fleet Street shop and other allies also took over publication and altogether over 150 men and women were sent to prison for producing and selling The Republican.

The Peterloo Massacre is remembered today as a turning point in the fight for democratic representation. The outright atrocity garnered widespread support for the cause of universal suffrage and radicalised and inspired a generation of activists. Richard Carlile is just one man amongst many whose life-long campaigning was fuelled by anger at the events at St Peter’s Square.

Conway Hall Library holds many texts published by Carlile, in particular the works of Thomas Paine and a run of The Republican journal. These are accompanied by the writing desk that Carlile used during his time at Dorchester Gaol, upon which his articles for The Republican would have been drafted.

Carlile and his involvement in the Peterloo Massacre are explored in our upcoming exhibition Victorian Blogging: The Pamphleteers Who Dared To Dream Of A Better World. This is part of a National Lottery Heritage Funded project to digitise and make freely available our collection of over 1300 nineteenth-century pamphlets.