To Waterlow, the note appeared to be a draft for ‘the parchment document put in a bottle under the foundation stone of the Chapel’ at South Place. Waterlow’s letter suggests that in 1876 the Congregation were aware of the parchment under the Chapel, but not of the text used to mark the Chapel’s foundation. Today, over 130 years later, we know that Fox’s note is likely to have read:

The Foundation Stone of this Unitarian Chapel, for the use of the Congregation previously assembling in Parliament Court, Artillery Lane, Bishopsgate Street, was laid on Thursday, May 22, 1823 by W.J. Fox, Minister. 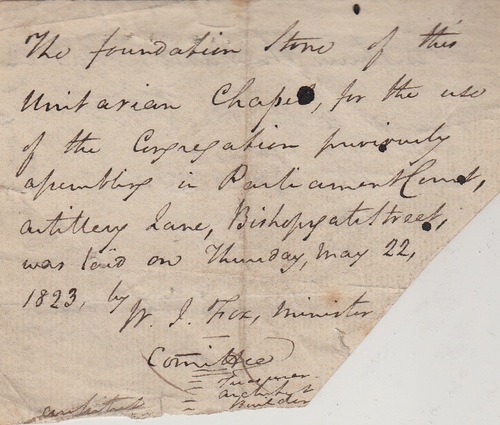 A small but brilliant find in the Archives which further adds to the colourful history of the Society.